Talismans have been worn by women, men, and children since the earliest known times in the history of humankind. Pet owners through the ages have also placed talismans around the necks of their animals. People and animals have been buried wearing talismans.

The study of talismans is fascinating. The history of talismans is interesting and oftentimes reveal that such items are full of magick applications! Magick involves belief, and magick and talismans go hand-in-hand in many instances!

Although many contemporary Christian sects would tend to deny it, the wearing of a crucifix continues to be considered by large numbers of Christians as a talisman, a good luck charm, or a sacred amulet. In other religions, sects, and sacred orders, different objects receive similar feelings of devotion. What is one person’s talisman is another person’s amulet or good luck charm, and these objects have different connotations to each person who wears or carries it. Such items can be in the form of a crystal, rock, or design attached to a necklace, ear rings, a bracelet, a finger ring, an ankle bracelet or toe ring, a stone carving, an image on a piece of paper or wood, or in some unique cases, a personal tattoo. 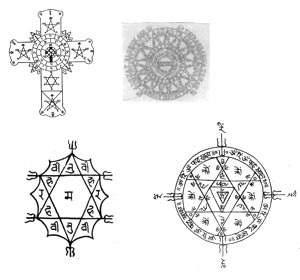 Yet, these objects each have the same thing in common by whatever name they are given: They are carried by the person or worn to help something beneficial happen to the person who possesses them! By whatever you wish to call it, the bottom line is that the holder sincerely believes the talisman has a certain special power and that special power will enhance and protect the wearer.

Whether it is the seals of Solomon or Moses, Hindu yantras, Chinese drawings, or talismans from whatever country you select, there are thousands to investigate. One may well be your own, and one of the beliefs is that a talisman picks its future owner.

In recent times, it has become popular to carry a talisman seal on a piece of paper in your wallet, purse, or pocket, or wear a ring or necklace which features that talisman. Talismans are here to stay. Look up what you seek, locate the talisman which has possibly already selected you, get it, and call it your own. It is a personal choice, and it is up to you.