The paranormal is enjoying a global boom, thanks to American reality television. The world is now familiar with specters that bang on walls and the living who search for monsters with vicious claws. Such things make people all gooey in front of the TV screen.

The “ghost hunting” avocation has exploded since the 2004 debut of Ghost Hunters. It is now an American national pastime as anyone can investigate, and traversing the unknown is a marvelous endeavor, indeed. This is a historical moment, for never have so many people around the world systematically engaged in paranormal research and investigation. One blind spot among some new investigators is an appreciation for the history and philosophies that inform what we do on our Saturday night haunt jaunts. Despite all the high tech equipment popular in the field, we unknowingly promote ideas that have been around for centuries. Many of us, guided by the model we see on television, are woefully ignorant of “ghost history.” Additionally, we often fail to appreciate how religion and culture shape ideas of the unseen in Western societies. 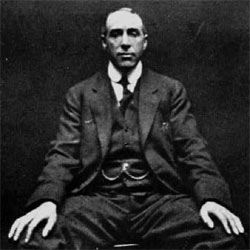 The “original” ghost hunter was British psychical researcher, Harry Price.
Yes and no. Harry Price was the first to coin the phrase with his 1936 manual, Confessions of a Ghost-Hunter. He promoted a methodology in attempts to capture evidence of paranormal activity. For those who do not know, Price canonized the field of ghost hunting within the emerging tradition of psychical research, and some say he was instrumental (pun intended) in bringing equipment to the field. No offense to Harry, but he is not the ghostly godfather. He merely popularized the term.

In the United Kingdom, The Ghost Club was established in 1862 and hovered for about a decade before it dissolved. The ghost hunting trend in the UK picked up again a few years later, thanks to Spiritualism, and included a wide array of creative thinkers. For example, in 1882, and there is a record that — gasp! – a woman was one early psychical researcher investigating apparitions. Rosina Despard, aka “Miss Morton,” was nineteen and living in a rented home in Cheltenham where a “tall lady, dressed in black, standing at the head of the stairs” made regular appearances. Sightings were quite frequent; six times between 1882-1884. Like any good investigator, she attempted to obtain evidence and experiment. She attached strings of different heights on the staircase and patiently waited, still camera in hand, for the apparition. Miss Morton captured nothing, but noticed the apparition seemed to glide through the strings, leaving them undisturbed as it climbed up the stairs. Others in the home also heard loud noises, witnessed the twisting of door handles, and experienced cold spots. Activity ceased by 1884, but the Society of Psychical Research recorded her experiments and data, leaving a record that predates Mr. Price, who merely expanded the role of psychical research. He is not the godfather of ghost hunting, as many suggest.

The Church has always distanced itself from the paranormal
Heck, no! There are debates today about religion and the paranormal, and tension has always existed. That did not stop the Catholic Church benefiting from apparitional sightings during Reformation. Apparitions were considered proof of purgatory, and the Church needed all the ammunition it could get to ward off the rising influence of Protestantism.

St. Augustine (died 430 AD) was an early Christine thinker regarding ghosts. He believed most accounts were imaginary, yet acknowledged real apparitions were possible. However, they were merely images of the soul placed in our realm by good and bad spirits. This seems unsophisticated by today’s standards, yet it is impressive that early Christian thinkers deemed it worthy of commentary.

Flash forward to the early 1600s, and King James got into the paranormal picture. This particular James as the man behind The Bible as we know it today (there were other versions before King James and his peeps got a hold of it). In addition to changing Christianity, he also wrote a treatise on ghosts and witchcraft. Ever the good Protestant, he suggested any spectral visions were never the souls of the dead but horrid trickery of the devil. This idea existed prior to King James, but anyone who can change The Bible can certain influence popular thought. The idea that ghost hunting is a bedfellow to the occult — ideas that paranormal TV helped dispel — animates from this historical development. Thank you, King James, for solidifying idea of demonics, and forever causing headaches for modern investigative teams who routinely must convince clients they do not have malicious activity in their homes.

This is an important point for today’s paranormalists, many who salivate to take on demonic case or claim to be demonologists. Contemporary demonic assumptions are based on religious and political conflicts between Protestants and Catholics, going back to the Reformation of the early 1500-1600s.

An Anglican priest first efficiently documented a poltergeist case in 1661 at Tedworth, England. Joseph Glanville went on to write a collection of ghost stories and witch accounts. He also proposed a rather unorthodox idea at the time that “spirits consisted of a lower and a higher aspect, aerial bodies and astral bodies…the aerial may have to wander the lower realms and the earth.” Although published in 1681, this concept mirrors many contemporary hypotheses on hauntings.

In short, one can argue it was not until the rise of scientism when Christian institutions started actively distancing themselves from paranormal reports, perhaps in an attempt to remain credible and relevant during the Enlightenment.

Ghosts have behaved the same throughout history
It seems that if intelligent entities exists, they should exhibit similar behavior regardless of the time and space they haunt. Sounds reasonable, and there are some consistencies to what we consider today as paranormal activity. Yet, history suggests there are significant differences in interpretations of paranormal activity.

Ghost armies were popular accounts during Greek and Roman times, and continued during the twelfth century. If we take such events literally, this suggests residual haunts similar to Gettysburg and other battlefields. There are numerous writings from the thirteenth century that includes ghosts and haunted homes. In fact, Christian apparitions are recorded from as early as 500 AD, the most common being Christian martyrs. Ghosts made themselves visible to those who could recognize them, and often sought proper burial rights or provided death-warnings for the living.

The popular belief behind apparitions from medieval times to the mid 1500s were efforts to seek prayer from the living, confessions, forgiveness, revenge, or atonement. Again, the majority of ghostly sightings were of someone familiar to the witness. Some reports from the fourteenth and fifteenth century included ghosts having full conversations with the living.

Geography made a difference, as well. In some parts of Europe, spirits were thought to only haunt graveyards. An Old Norse tradition migrated to Germany, and provides an early precursor to zombie folklore with the “walking dead’ of the 1300s. The haugbui was a dead person who was “bound to their gravesite and harm only those who crossed the barrier to his domain.” Another ghostly precedent was set during this period with perhaps the first documented account of a “women in white” in 1225. The ghost-in-chains made its debut, as well.

During the Middle Ages, the public became fascinated with death and the afterlife, and this influenced discussion of apparitions. Reports included ghosts who had “physical marks from their time in purgatory.” Religious filters influenced how people understood, or perhaps imagined, supernatural events. Moreover, dreams and visions were valid ways to communicate with the dead, and the living could intercede on behalf of the departed.

Demonic and angelic explanations for apparitions and visions were present from the beginning of Christian influence in Europe, but public interpretations muted such ideas. It was during the Reformation when demonics and occult aspects became more influential. By this point, three types of “ghosts” were popular: purgatorial, demonic, and heavenly. The purgatorial and heavenly ghosts usually came back to seek forgiveness or parlay a message, and most often appeared to someone who would recognize them.

The Enlightenment ushered in a new paradigm of scientific and rational thinking. Ghosts started to slip into the realm of the woo-woo as scientism emerged to replace religion. Science discovered natural laws governing the physical world and attempted to use such laws to interpret personal and spiritual experience, Spirits did not fit within that paradigm, and apparitional occurrences became less meaningful to the Church as a means of social regulation.

Yet, ghosts did not completely disappear. An intriguing change took place. Now, most reports were from observers did not recognize the apparitions, and ghosts no longer sought revenge, atonement, or release from purgatory. For the first time, spirits were merely there, perhaps doing their own thing and not necessarily cognizant of the living. It is during this historical moment that spectral sightings become an independent, anomalous occurrence free from religious explanation. Ghostly sightings from this period were more likely to be shadowy or black rather than white or glowing. By the Victorian era, more accounts surfaced of objects moving and poltergeist activity. This period also witnessed an increase of crisis apparitions of the living, as well as death warnings in forms of ghostly visitations. One interesting note on consistency: throughout history, women have been the primary observers of spectral activity.

In another interesting shift, scholars wanted to quantify anomalous experiences, thus the rise of psychical research. As ghosts were very hard to measure, the sufficient avenue was to study those who claimed to communicate with spirits: mediums. These early researchers, such as Harry Price, were the first to assert a “scientific” methodology to investigating ghosts as events into themselves, as well as the newly minted idea of consciousness. (The rupture between science and the paranormal has reached epic proportions today, as academicians are even less inclined than they were 100 years ago to research anomalous events. The one exception being quantum physicists, who understand the nature of reality is not what it seems).

Contemporary education of ghosts and investigators
Today, ghost hunting is a full-blown public endeavor (although some remain closeted due to professional or personal reasons) and a mix between psychic impressions, technical documentation, and skeptical approaches. Ghosts are fully out of the closet, however, and push, pull, speak, knock things over, wear white or shadow attire, appear in orbs, look just like you and I, loudly stomp, play with children, bite, and light up various equipment we take on investigations. Sometimes they even pose for pictures. One can argue spirits have become more sophisticated over they years. With all the increased attention afforded by the TV shows, one may also advocate they unionize and seek entertainment lawyers.

All jokes aside, this article points to a few things investigators need to keep in mind. First, lets assume that genuine anomalous events have always occurred that defy explanation. Second, we recognize that many accounts, now and in the past, are merely results of fertile imaginations and folklore. Today, investigators must acknowledge our understanding of spirit activity is always interpreted by the cultural and historical moment in which we live. Paranormal reality TV reflects long-held Western religious assumptions about the unseen, and we take these assumptions out on investigations. More often than not, these innocent suppositions prohibit us from truly innovating a field that still employees some philosophies dating back to the 1500s! For example, the popular idea that intelligent haunts linger because of “unfinished business” has existed since medieval times.

There are some key elements not covered here, such as the “isms.” Animism, animal magnetism, mesmerism, and Spiritualism have greatly influenced the language we use to describe and discuss hauntings. A separate article best discusses such issues.

Perhaps it is time to refresh the dead with a new discourse. The emerging field of quantum mechanics, plus a better understanding of ghostly history, makes room for a new paradigm – and a new language – that may finally crack the code of the unexplained.