Click on pictures for larger view in a pop-up window. 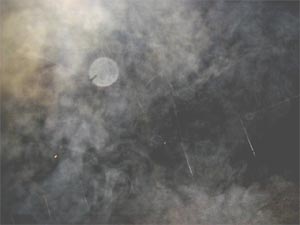 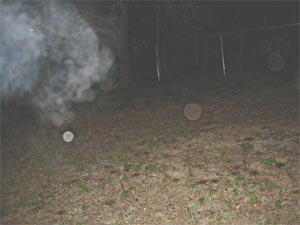 On August 23, 2006 at about 2:01 AM, I had to use the bathroom and right away I smelled the odor of Lilac — it only lasted for a few seconds and then went away. I really didn't think much of it because we smell it a lot of times in and out of the house. It's here and then it's gone.

The next night, August 24th, was a very bad night. I was in a very deep sleep and I felt someone trying to wake me up by pushing down on my shoulders. I woke up and turned to the left side to see who it was and at that moment a large dark shadow moved quickly into the bathroom. I looked at the clock and it was right at 3:00 a.m.

The next morning I was telling my friend Rai what was happening to me the night before. Rai told me that I was doing a lot of bouncing on my right side like someone or something was pushing me up and down like they were trying to wake me up. It was the strangest thing.

I thought maybe the spirits are trying to tell me something, so few days had past and I started to look through some of my pictures — and I remembered that I have 500 or so pictures that I haven't even looked at since March. I normally take pictures in Fall and early Spring and then develop them later when it gets hotter and you can't go out at night to take pictures. Well I started to go through my pictures and I would like to share what I caught on the camera. Our property is haunted all over, but there are a few hot spots on our property. We have an old green mobile home for storage and at the end of that storage unit is where it begins to be hot for spirits and to the left of it. To the corner of the property along the side of the 8-foot fence seen in the pictures.

I took these pictures on the same night, one right after the other. Very strange. You can see the manifestations of people. The camera was a Sony Cyber-Shot
Carl Zeiss Vario-Tessar Lens. 5.1 Mega Pixels.