30,109 Subscribers to this newsletter!


History is a ghost story. This past weekend I had the opportunity to visit Erie, Pennsylvania, because I was giving a talk at Mercyhurst University. My connecting flight took me from Philadelphia to Erie. As the plane took off out of Philly, I couldn’t help but think that I was following the same exact route as one of America’s most famous ghosts: Revolutionary War hero, General “Mad” Anthony Wayne.

General Wayne earned his moniker “Mad” Anthony on July 16, 1779 when he led 1,200 light infantry troops against a British fort on the cliffs of Stony Point, New York, overlooking the Hudson River. With West Point just 12 miles away, the British presence was a huge threat. General Wayne led the charge under the cover of darkness. He told his troops they would use bayonets only, as gunfire would awaken everyone inside. Considering there were close to 600 British troops stationed inside the fortification, and the enemy held the higher ground, everyone told General Wayne he was crazy to attempt such a maneuver.

Within 30 minutes, Wayne’s troops suffered 15 dead and 83 wounded. However, the British suffered 94 casualties and 472 were captured as Wayne took the fort. General “Mad” Anthony Wayne’s legend soon spread. After the Revolutionary War, George Washington sent him to Ohio to help in the Northwest Indian War.

Wayne was just as successful in Ohio, but he fell ill with gout in December of 1796 and died at Fort Presqu'Isle in Erie, Pennsylvania, on the 15th of that month.

He was buried at the base of the blockhouse there, but that’s not where his story ends. In 1808, General Wayne’s son, Isaac, rode a small sulky carriage up to the fort to retrieve his father’s body to be reinterred in the family plot at St. David’s Church near Philadelphia. When Wayne’s casket was dug up, they found his body had hardly decomposed. 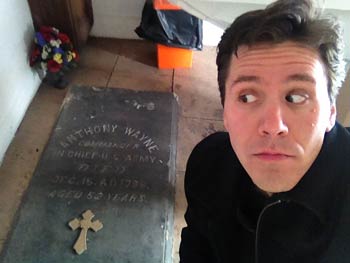 Dr. John Wallace dismembered and boiled the body of the General to separate the bones from the flesh so Isaac could take something back home. He placed the bones in a box, and put the flesh, Wayne’s uniform, and the surgical implements used in the ghastly procedure back into the original grave and covered it with dirt.

Back in Erie, Wayne’s original grave was lost in 1853 because a fire destroyed the original blockhouse. When his grave was rediscovered in 1878, a new blockhouse was built and a new marker was laid inside to honor the grave where some of the General still resides. “Mad” Anthony Wayne is one of the few historic figures with the distinction of being buried in more than one grave.

The ghostly legend comes from a story that claims as Isaac journeyed 360 miles back home to southeastern Pennsylvania, the box carrying the bones of his father spilled from his small carriage and some were lost en route.

Now, each January First (Wayne’s birthday), the ghost of “Mad” Anthony Wayne is said to rise from where his bones are buried at St. David’s Church and then glide northwest along modern-day Route 322 all the way back to Erie in search of his lost bones.

Today the blockhouse is under lock and key, but I was able to arrange access. To commemorate the moment I took a selfie. What would you do?

General Wayne’s ghost story is the only thing to make him a more interesting figure than he already is. We should tell these tales because they connect us to who he was and where he’s been. The story and the ghosts have a lot to tell us if we just listen.

Congratulations to Cynthia Garbarsky of Williamstown, Massachusetts who was last month's winner!

How to win: Entries will be accepted up until 5:00 PM (eastern time) tomorrow (November 19, 2014). At 5:00 PM, we will draw a winner at random from the correct entries that have been received. You only have until 5:00 PM to get your answer in. The winner will be announced in next month's newsletter. To submit your entry, simply reply to this email with the correct answer.

According to the New England Legends segment on the origins of Halloween, what was the name of the cave where Halloween was born?

Encounters: The Loud Noise in the Cave Springs Winery Cellars

Encounters: The Churning Fog in the Guest Room

Encounters: The Girl on the Lake