30,315 Subscribers to this newsletter!


Whenever I hear those first few bass pops from Stevie Wonder’s song “Superstition,” I start groovin’. It’s all there in the song “…broke the lookin’ glass / Seven years of bad luck, the good things in your past.” Not just a great song, “Superstition” taps into something we all feel at some point, whether it’s carrying a lucky rabbit’s foot (never lucky for the rabbit), avoiding the path of a black cat, or eating chicken before every professional baseball game you play in, superstition is a force that crawls inside of us and makes a home. It doesn’t matter if it makes sense or not.

Here’s the funny thing: to the individual, superstition is hard science! If you eat chicken before a baseball game and have a good game, then one day you skip the chicken and play lousy, that’s easy observable science. Eating chicken may not guarantee a good game, but skipping it guarantees a bad game. It may sound ridiculous, but it was a fact for Red Sox Hall of Famer Wade Boggs.

Believe in a thing and it becomes real. Tell my seven-year-old daughter that her stuffed animals aren’t real. She loves them, plays with them daily, and they love her back. It’s real. Tell me the two aces I’ve carried in my wallet for the last twenty years don’t mean anything and I’ll vehemently disagree. Superstitious? Yes. Invalid? No. 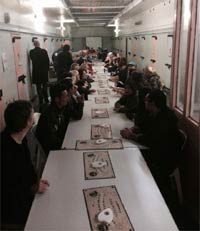 This month we’re going to explore superstitions on the NEW Ghostvillage.com. Last month we announced the re-launch, and if you haven’t checked in lately, we’ve polished the fenders, added some new content, and integrated everything. We’ll be adding new features regularly now. Be sure to check out all of the great creepy photography from Frank Grace! If you like the image, you can click on it and purchase prints online.

In other big news this month, my New England Legends show that I produced, wrote, and hosted for PBS earned an Emmy nomination! This whole project was funded by myself and my partner, producer, director, and editor Tony Dunne. We enlisted our friends, Director of Photography Nate Buynicki, and musician John Judd, and then begged, borrowed, and stole to get these two episodes produced.

Now that we’ve been nominated, other New England PBS stations have agreed to air the show, so I’ll be announcing new air dates soon. It’s been an amazing journey, and to earn this nomination on a project that we built from nothing is so satisfying. Thank you to everyone who has purchased the DVDs and supported me on this project. We’ve been filming other shorter segments for PBS affiliate WGBY—those segments will be available on Ghostvillage.com for viewing after they air. It’s been a blast to work on these stories. In many cases, these legends are so visual, there’s no other way but to strap on your boots and take a camera out there.

Speaking of out there… (for me, at least) I just got back from Australia. It was as far from home as I could travel (had I gone any further, I would have been getting closer again). I was a speaker at the Paracon Australia event at Maitland Gaol. I had an amazing time and met a great bunch of people. My buddy, Ouija board expert Robert Murch was there too. Inside the old jail we may have broken a record: 67 people using Ouija Boards at once. Somehow the portal to hell didn’t open, but we did open up some great discussions. Thanks to all my new mates Down Under!

Enjoy the rest of the newsletter below.

Whomever the old woman is that haunts the Murdock-Whitney House, she's very protective of her home. She wanders the hallways, and is especially averse to allowing people into her bedroom. Her footsteps are heard throughout the house, including the mysterious third floor, in which the staff refuses to enter by themselves.

Built from 1820-1830, the Murdock-Whitney House is the home of the Winchendon Historical Society and one of the town's most beautiful and historic mansions, with its Colonial Revival redesign and Victorian elements.

Joining us on this event will be Dustin Pari from Ghost Hunters and Ghost Hunters International! Click here for more information: http://www.legendtrips.com/Murdock-Whitney-House2014.shtml

Encounters: A Demonic Figure in My Home

Personal Encounter
http://www.ghostvillage.com/ghostcommunity/index.php?showtopic=33595
A symbol on the mirror.

Religion and Spirituality
http://www.ghostvillage.com/ghostcommunity/index.php?showtopic=33476
Do you ever get annoyed with God?

Beginner's Block
http://www.ghostvillage.com/ghostcommunity/index.php?showtopic=27982
How to know if you're a sensitive.


Board of the Month -- Superstition
http://www.ghostvillage.com/ghostcommunity/index.php?showforum=27
What are your superstitions?